We are continuing siman 8. The Chayei Adam makes a final list of the considerations to take into account when determining the correct order for reciting brachos between two items. There are some differences between his order and that of the Mishnah Berurah; since we ultimately pasken in accordance with the Mishnah Berurah, we will follow that order instead.

The Mishnah Berurah’s order can be found at the end of siman 211. This order applies to two or more items where at least one of the items has one of the advantages listed in numbers 1-6, or when all items are haeitz:

In regards to items 1 through 10, the Mishnah Berurah points out that when there is one of the shivas haminim involved, we do not take chaviv into consideration at all.

On the other hand, when the question is between two items, one of which is haeitz and one of which is haadama (even if one of them is shivas haminim), or two items which are both shehakol, chaviv is the primary consideration. (As we have learned, chaviv refers to the item generally considered chaviv, not the item considered chaviv at the moment.) If both of them are equally chaviv, then we consider whether one of them are of the shivas haminim. When both items are equally chaviv to him, and one is chaviv now as well (like the opinion of the Rambam), that will take precedence before shivas haminim also.

When shivas haminim is considered (in the previous paragraph), the advantage of being written earlier in the pasuk applies regardless of its bracha. This means that wheat in its haadama form (roasted wheat kernels) will precede fully grown olives, and so on.

If neither item is chaviv nor shivas haminim, one should precede haeitz before haadama. If both items are haeitz, or both items are haadama or shehakol, we follow the Rambam’s chaviv of whichever is considered more chaviv at the moment.

Finally, the Mishnah Berurah points out that all brachos on food and drinks precede brachos on smell. 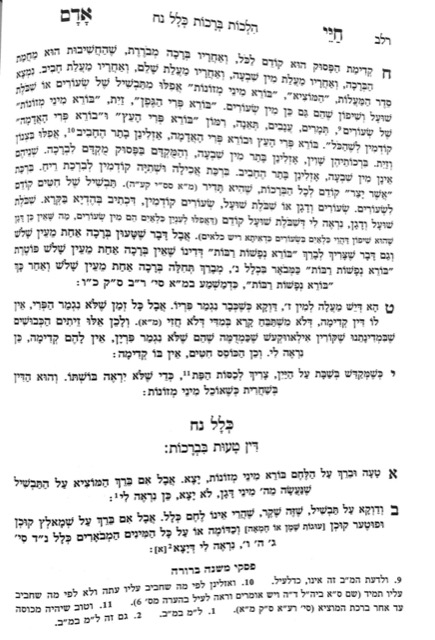