We have finished siman 4, where we learned about the bracha made on receiving a gift. The Chayei Adam wrote that if a poor person receives a gift, they make a hatov vehametiv, because both the poor person and the giver benefit–the recipient from the gift, and the giver from the opportunity to give tzedakah. The Gra disagrees with this opinion, and holds that one makes a shehecheyanu. The Mishnah Berurah writes that one should make a shehecheyanu to avoid the safeik and be yotzei according to all opinions.

When a kallah receives an engagement ring from her chosson, the simple understanding would seem to be that she should make a shehecheyanu even according to the Chayei Adam, as the Chayei Adam only stated his opinion regarding a poor person where the giver also benefits. However, when the Shulchan Aruch brings down this halacha, he states simply that any time a person receives a gift, they make hatov vehametiv.

The Mishnah Berurah explains, based on the Rosh, that even if both parties are wealthy, a gift given to a wealthy person brings benefit to the giver as well, because the giver receives simcha from the recipient accepting the gift. Multiple rishonim, and the Gra, disagree and hold that the correct bracha is shehecheyanu, as we learned above.

Rav Shalom Shapiro Shlit”a, in his sefer Imrei Shalom, volume 3, writes that he heard from a talmid of Rav Moshe that Rav Moshe paskened l’maaseh that the kallah should make hatov vehametiv. Although Rav Moshe did not explain why, he suggests that the reason is because the chosson feels tremendous simcha from the kallah accepting the ring, and there is a tangible benefit added to the relationship through her acceptance, so the ring is of benefit to multiple people and the correct bracha will be hatov vehametiv.

The Chayei Adam points out that, based on what we have learned, maybe the kohen should make a hatov vehametiv, because the father benefits from the transaction as well by being able to do the mitzvah. However, the Chayei Adam explains that we find that generally, there is no bracha made on any of the matnos kehuna (because they are mitzvos, see below), so a pidyon haben is no different.

In siman 5, the Chayei Adam discusses acquiring an item which is primarily for mitzvah usage, such as sefarim. The Chayei Adam writes that due to the rule that mitzvos lav le’henos nitnu (mitzvos were not given for us to gain material benefit, therefore any perceived material benefit is not halachically considered benefit), one does not make a bracha. However, he brings an opinion that one does make a bracha.

The Chayei Adam’s own opinion is that if one derives simcha from having been able to procure the specific sefer, they would make a bracha, because then they are making a bracha on the simcha derived from the acquisition (see shiur 1195). However, if they do not derive particular simcha from the item, they do not make a bracha.

The Mishnah Berurah brings this halacha down a little differently, writing that if one decides to make a bracha, we do not have to stop him. Some poskim suggest to have an item which certainly requires a shehecheyanu (e.g., a new fruit) and have the mitzvah item in mind when making the shehecheyanu. 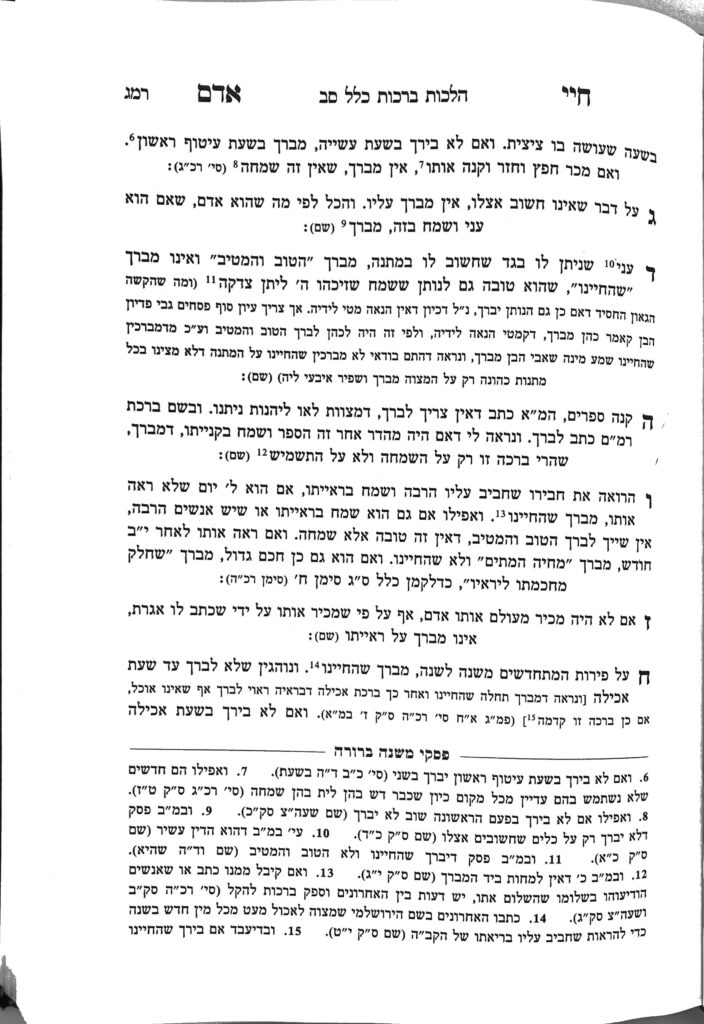