We are beginning Klal 64, which discusses the halachos of tefillas haderech.

There is a machlokes rishonim regarding the proper time to recite tefillas haderech. One shita holds that a person should recite it before they leave for their journey. However, most rishonim pasken that one cannot recite tefillas haderech until they actually leave, and the question becomes defining when a person is considered having left on their journey. We pasken that while a person is still in the city, or immediately adjacent to it, they are not considered as having left the city. Chazal determined that 70 amos (approx. 140 feet) outside of a city is considered on the road and out of the city. This amount is known as the ibburah shel ir. Ibburah shel ir can create challenges in defining the end of a city, because it allows adjacent cities to become connected.

Either way, once there is a significant gap in houses, all agree that one should recite tefillas haderech. Nevertheless, there are some poskim who still follow the 70 amah shiur. According to them, for example, passing over a long bridge would require reciting tefillias haderech.

The Mishnah Berurah adds that if a person recites tefillas haderech inside the city, they should not repeat it, since there are some rishonim who hold one is yotzei.

If a person is traveling on a multi-day journey and stops overnight in a city, they recite a new tefillas haderech in the morning. However, since they are currently in transit, they can recite tefillas haderech while still within the city (according to all opinions). The most appropriate place for them to recite it is at the end of birchos hashachar, after the bracha of hagomel chasadim tovim, as tefillas haderech is an extension of the kindnesses that Hashem does for Klal Yisroel.

The Chayei Adam writes that it is most appropriate to recite the tefilla in plural form. Even if one personally is traveling alone, the bracha is recited as a tefilla for all travelers. A person should connect themselves to the tzibbur, and there is a greater chance that their tefillos will be answered when they are connected to a tzibbur. The only exception is the phrase vesit’neini lechein ulechesed which is always recited in the singular form.

Bedieved, if one recites the bracha in singular form, they are yotzei.

The tefilla ends off with the bracha of baruch atah Hashem, shomeiah tefillah.

If a person is returning home on the same day, they should add in the phrase vesach’zireini leshalom. 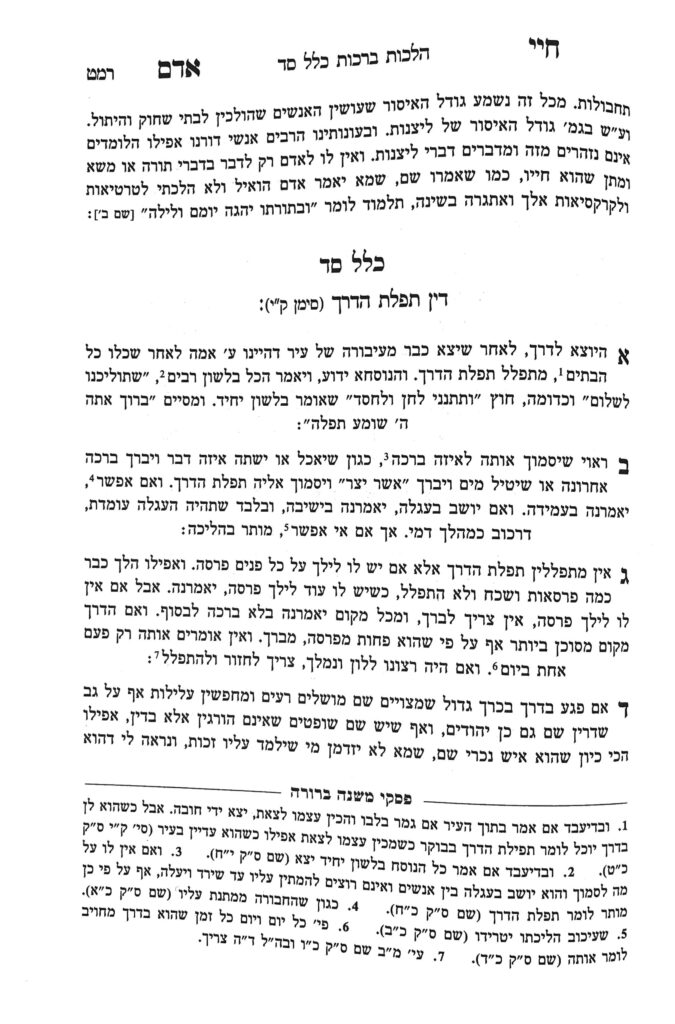