We are continuing in siman 4, which discusses the bakashos one recites if they travel through a large, dangerous city.

If one lives in the dangerous city and is travelling outside of it, instead of reciting the bakashos mentioned yesterday, they recite the regular tefillas haderech. The Mishnah Berurah asks that, based on the wording of the bakashos, it appears that the bakashos were regarding the act of leaving (or entering) the city, which in and of itself was potentially dangerous. If so, the bakashos instituted were for that danger, and not for the general danger of the high road. Why would tefillas haderech be a substitute for these bakashos?

The Mishnah Berurah explains that since a person lives in the city, they have connections and know people, so the act of leaving the city is not a concern. The only area of concern is the high road, so they recite tefillas haderech.

The Chayei Adam clarifies that these bakashos only apply to a kerach, a large city. Chazal define three general sizes of cities, a kefar (village), kerach (large city), and ir (mid-sized). In a kefar or ir, these dangers are generally not as common. However, the Chayei Adam clarifies that these bakashos are recited appropriate to the context, so if one feels they are in danger in a smaller city, they should recite.

In siman 5, the Chayei Adam writes that one who has fear of Hashem should learn while they are travelling. However, one should not learn things which require one’s full involvement, as it may distract them from their journey. Chazal learn that Yosef warned his brothers al tirgezu baderech, he was warning them not to get too involved in their learning, so that they do not hurt themselves ,due to not noticing dangers along the way (see Rashi to Bereishis 45:24).

However, the Chayei Adam clarifies that if one is riding in a wagon, the restriction against learning things which require one’s full involvement does not apply.

The Chayei Adam describes the shemirah, protection, that a traveler receives when they learn while on the road. The Klausenberger Rebbe, ztl, has been quoted as suggesting that if one were to learn for the entire duration of their trip, they would not need to recite tefillas haderech. Practically, we recite tefillas haderech because we are concerned that one will be unable to keep  their focus.

The Chayei Adam writes that a person should be concerned for the possibility of an accident or other impediments of their journey, so they should bring extra bread with them. Similarly, the MIshnah Berurah writes that one should not overeat when they are traveling, as it can lead to stomach discomfort.

In siman 6, the Chayei Adam writes that one should take along a second pair of tzitzis, in case their regular tzitzis tear. Although we are not as concerned about this halacha nowadays, since our travel is safer (in this context), the Mishnah Berurah writes that one should always travel with tallis and tefillin in case something happens.

The Mishnah Berurah writes that one should be notel reshus (say goodbye) to the gadol of the city before departing. 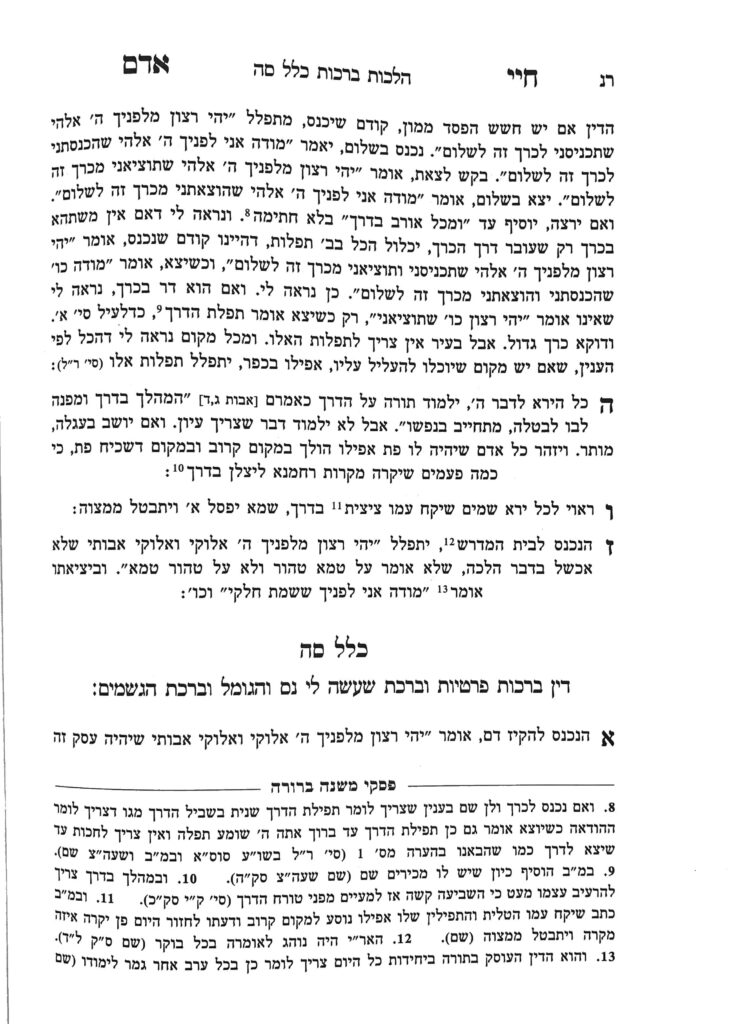