We have finished siman 8, and have a few points to clarify. It is interesting to note that the Chayei Adam understands the issue with a non-Jew feeding a child issur is an issue with the act of feeding, rather than the end result (i.e., that the katan ate issur). The Chiddush of amira l’akum is that even though the non-Jew performs the action, it is considered that the non-Jew is functioning for the Jew, and the action relates back to the Jew. Moreso, the issur of amira l’akum exists specifically regardless of whether the resulting action is assur or not, but rather due to the non-Jew performing an action on my behalf. When the result is the issur, it is obvious that it is assur to ask a non-Jew to create the result, and does not require the chiddush of amira l’akum. The fact that the Chayei Adam understands that the issue with a non-Jew feeding a katan is amira l’akum means that he understands the primary issue is not the end result, but the action of the non-Jew; namely, the feeding of the issur to the child. Thus, the Chayei Adam’s understanding of the issur of sefiya is that Chazal were concerned about the action of the adult, more than the result of that action.

In siman 9, the Chayei Adam writes that we can be matir issurim derabanan for a sick child. Although we do not rely on the Rashba’s opinion that one can perform sefiya b’yadayim on a child regarding issurim derabanan for a healthy child (see shiur 1291), we will rely on it for a child who is sick. Howeve, the Chayei Adam adds that preferably it should only be relied upon through amira l’akum. We learned previously that the Mishnah Berurah was willing to rely on the opinion of the Rashba in general; thus, regarding a sick child, the Mishnah Berurah arguably would not require amira l’akum.

The Chayei Adam appears to agree to this possibility. He next writes that if a child needs to eat chometz on pesach, one can have a non-Jew feed them chometz, even if they are just a choleh she’ein bo sakanah.

If the child is a choleh she’yeish bo sakanah, the adult should do whatever necessary to save the child’s life.

The Jew must ensure that the chometz belongs to the non-Jew; should one have this question, they should ask their rov. 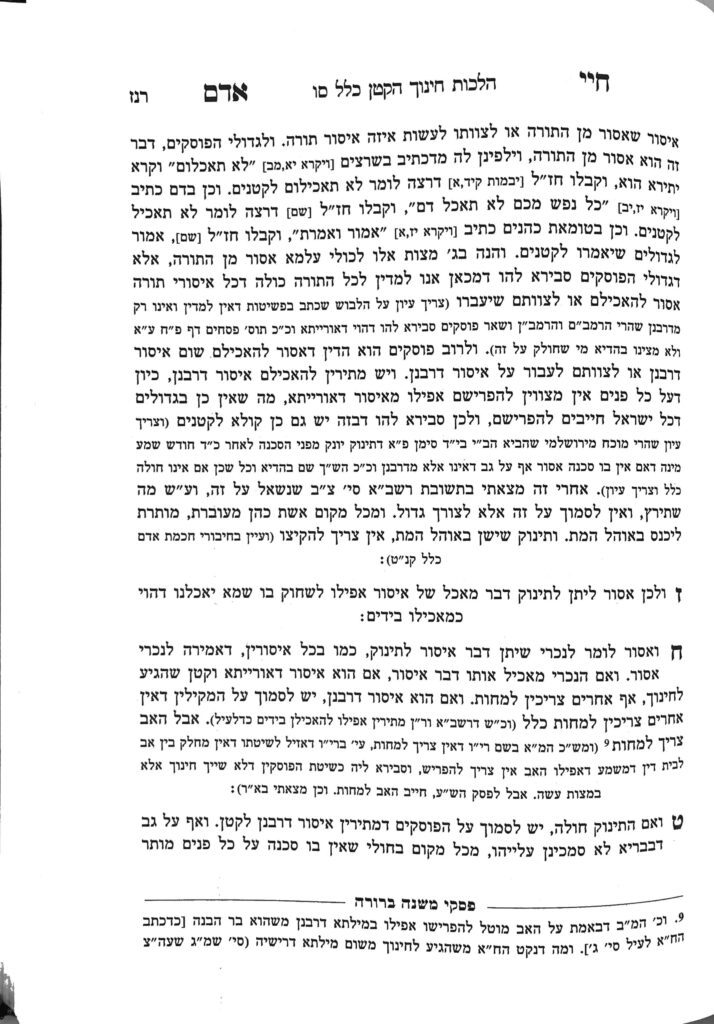