We are beginning siman 13, where the Chayei Adam discusses a child who is nursing. The scenario of the Chayei Adam is generally not applicable anymore, but we can still learn from the guidelines he sets down

A child may nurse until 24 months, even if the child stopped at some point during that period.

After 24 months, if a child has stopped nursing for three full days (72 hours), they are not allowed to restart.

In siman 14, the Chayei Adam writes that a child may be nursed by another woman; i.e., a wetnurse. Halachically, a child may nurse from a non-Jew in addition to a Jew. However, one should try to employ the services of a Jew, and avoid using a non-Jew. The non-kosher consumed by the non-Jew gets absorbed by the child, and can cause a timtum haleiv and possibly a mezeg ra (a mixture of bad character traits). Similarly, if a Jewish mother or wetnurse needs to eat non-kosher food (due to sickness or the like), they should not nurse the child but rather find someone else.

The source of this halacha is a midrash regarding Moshe Rabbeinu. The Midrash writes that Moshe refused to nurse from a non-Jewish woman, so Miriam suggested to Basya to get Yocheved, his birth mother.

From the fact that this halacha is learned out from Moshe Rabbeinu, we see that we treat every child as a potential Moshe Rabbeinu. We do not argue that since our child will not be speaking with the shechina, we do not need to care for this halacha.

Additionally, we see that if we are concerned about a non-Jewish woman’s milk, which emanated from non-kosher sources, we must be significantly more concerned regarding non-kosher food itself. Although we learned earlier that we are not obligated to stop a child from performing an aveirah, if an adult sees a flagrant transgression, it may be proper to intervene even without an obligation, per se. One should be sure to discuss such situation with their Rov, in order to ensure the correct actions are taken.

It is important to note that the simanim we have learned thus far in the Chayei Adam have discussed the basic halachic requirements of chinuch. Individual parents may have greater hopes, expectations or goals for their children beyond the minimums of the Chayei Adam. 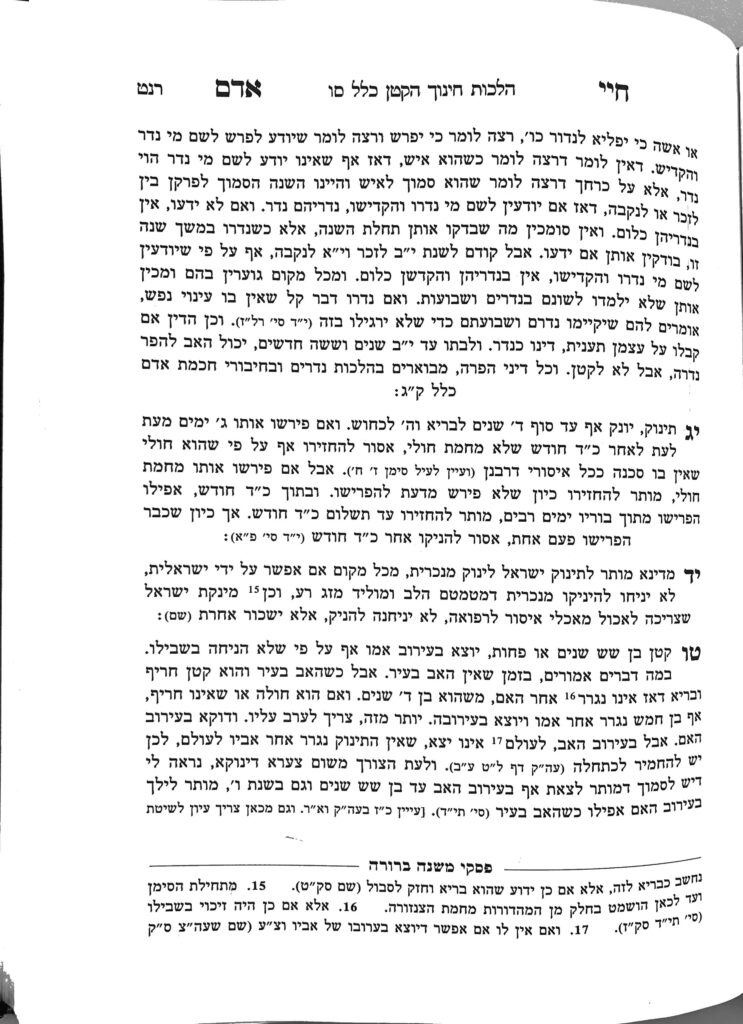