The Biur Halacha, in siman 60, infers from the Gra that he disagrees, and understands that the Gra holds mitzvos tzrichos kavana applies to both mitzvos deoraysa and derabanan.

The Biur Halacha points out an important implication. According to the second understanding of the Magen Avraham, if one is unsure whether they had kavana on a mitzvah deoraysa, we could employ the concept of s’feik s’feika (a double safeik) and exempt a person from repeating the mitzvah. (The halacha is that when one has a s’feik s’feika, over a responsibility or obligation, they are not chayav in it.) However, according to the Gra and the first understanding of the Magen Avraham, that mitzvos tzrichos kavana is a din vadai on a mitzvah deoraysa, they must repeat the mitzvah

The Chayei Adam continues, and qualifies that if one does not have clear intent when doing a mitzvah, but it can be understood circumstantially that one did the mitzvah l’sheim mitzvah, it is enough to assume that one had the proper kavana and is yotzei. For example, when one recites a bracha before doing an action, even if they did not have explicit kanava, the fact that they preceded the mitzvah with a bracha is sufficient for us to assume that the action is the l’sheim mitzvah. However, in a scenario of one who is learning, and comes across the paragraphs of Shema, it is not obvious from the context that they are reading Shema for the purpose of being yotzei, so they would not be yotzei without explicit kavana.

Similarly, the Gemara gives the cases of someone blowing shofar for the enjoyment of the sound, or someone forced to eat matzah who does not realize it is Pesach. In these situations, one is not yotzei without explicit kanava. However, if a person is sitting at the seder and eating matzah, blowing shofar in shul, or taking a lulav with all four minim, it is obvious from the context that they are trying to fulfill a mitzvah, and they are yotzei even without kavana.

The Mishnah Berurah gives the example of someone who sits down at the end of their meal to bensh. If they bensh out loud to help their children bensh, they would not necessarily be yotzei, because it is not clear from the context that they are fulfilling the mitzvah of birchas hamazon. However, if they are eating alone, the only reason they would bensh after a meal is to fulfill the mitzvah of birchas hamazon, so they are yotzei.

The practical implication would be a case of someone who is unsure whether they had kavana. 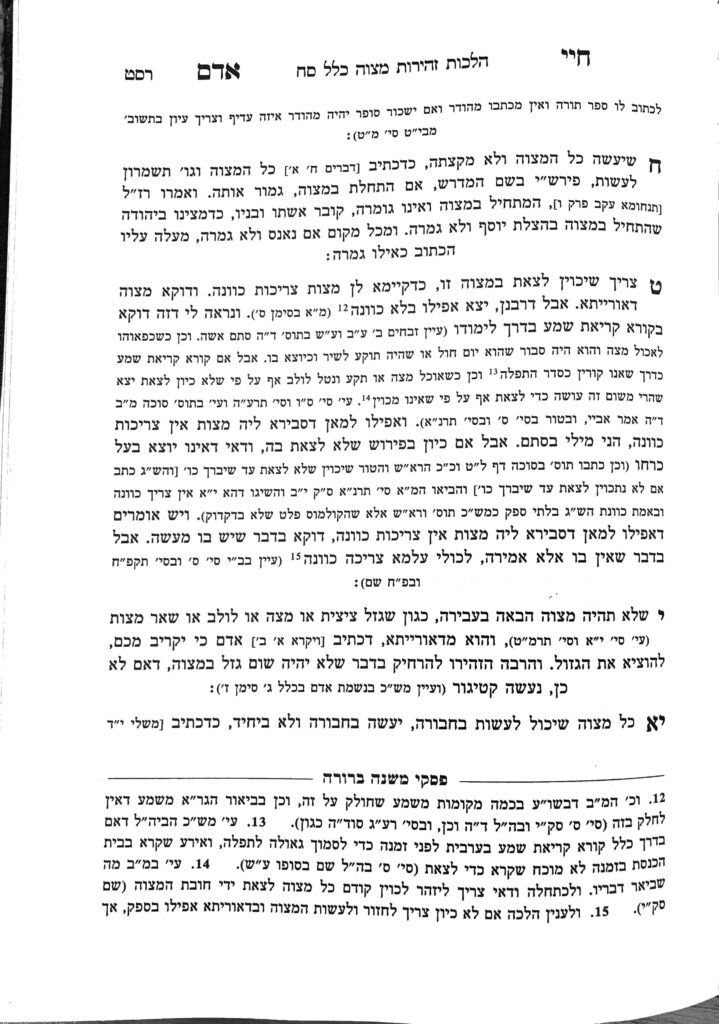