We are continuing in siman 21, regarding the concept of ma’alin bakodesh. Yesterday, we learned about the kedusha of an aron kodesh, and today the Chayei Adam continues with an interesting question.

The Chayei Adam discusses a case where a beis tahara was right near the shul, and there was a hole in the wall between the beis tahara and the shul. When the chevra kaddisha would prepare a meis, it would create an issue of tumah in the shul, preventing kohanim from entering. The shul had a free standing aron kodesh, which could block the hole in a way that it would prevent the tumah from entering and allow kohanim to enter. Based on what we have learned until now, it would appear that using the aron kodesh for such a purpose would be assur, but the Chayei Adam writes that it is muttar. He explains that since the aron kodesh needs to be placed somewhere, it is not considered misuse of the aron kodesh if its place is now in front of this hole rather than along a different wall. The aron kodesh remains designated for Sifrei Torah, and since there is no change in the designation of the aron kodesh, just in its place, it is muttar. We learn from here that in situations where an item of kedusha is not changed in a manner that affects its inherent designation, it is muttar to use in that manner.

The Chayei Adam discusses another scenario. People who print and bind books would sometimes print the sefer on larger peices of paper and then cut the paper down to size. The Chayei Adam cautions that the paper can only be cut once. To explain, when the sefer was originally printed, the printer knew that he would cut a certain amount of the excess, so there is an unspoken tenai that the excess was never part of the sefer (similar to the lev beis din tenai we learned about previously). However, once it was cut down, the remaining margins become designated for the purpose of the sefer. If so, if the printer changes their mind and decides to cut more of the paper, that paper has already been designated for the kedusha of the sefer, and it cannot be downgraded, because of the concept of ma’alin bakodesh.

Another scenario the Chayei Adam discusses is the accessories for the Sefer Torah. There were certain coins printed by non-Jews with the name of Hashem on them, which the non-Jews printed for the purposes of avodah zarah. The Chayei Adam writes that when making a crown or breastplate for a Sefer Torah, one should not incorporate such coins into the crown or breatplate. Rather, one should rather melt them down immediately (irrelevent of the accessories of a Sefer Torah).

A aron kodesh may be used to create a partition, because it does not change the inherent designation of the aron kodesh.

Excess margins which have already been designated for a sefer have the kedusha of the sefer and cannot be cut.

Coins made for avodah zarah with Hashem’s name should be melted down immediately; they certainly should not be used for kedusha purposes. 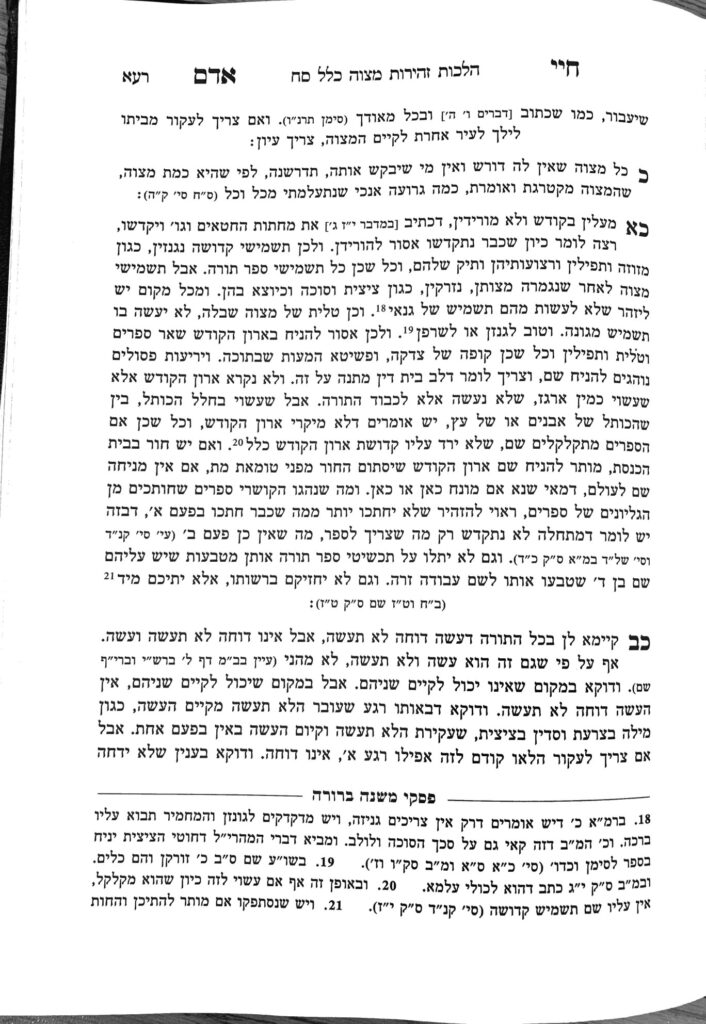