We are continuing in siman 23, discussing the halachos of bal tosif. We learned that if a person takes two pairs of tefillin, or two lulavs, at the same time, they transgress the issur of bal tosif, even without kavanah for bal tosif.

There is a Gemara in Sanhedrin which says that hai lechudei kai v’hai lechudei kai, that if one does something which can be construed as two separate actions, it is not considered bal tosif. The Gemara in Sanhedrin applies this concept to someone who adds an extra species to their arba minim, and says that we can look at the extra species as a separate action from the other four species, because there is nothing which halachically connects the extra species to the other four, so one has not transgressed bal tosif. Why, then, does the Chayei Adam write is it bal tosif to take two lulavs?

There is discussion in hilchos lulav whether one can take more than two aravos, or more than three hadassim, and this question would apply to that discussion as well.

The Rashba holds that generally, a person would transgress bal tosif any time that they take more species than they should. However, the Gemara in Sanhedrin (which implied that one would not transgress bal tosif) is discussing a different point, which is that two lulavs are looked at differently. When one adds an extra string to their tzitzis, they now have a tzitzis tassel of five strings, so the entire tassel is invalidated. On the other hand, taking a second pair of tefillin, or a second lulav, even though it is bal tosif,  the kasher mitzvah is not invalidated because each item is looked at on its own and is not impacted by the other. Therefore, the Chayei Adam understands that even in this case, one has transgressed bal tosif.

The Chayei Adam continues, and writes that if one puts five strings on their tzitzis, or five batim in their tefillin, they have also transgressed bal tosif. On the other hand, if a person tries to fulfill the mitzvah a second time, even if it is the type of mitzvah which is only fulfilled once, they do not transgress bal tosif. For example, if they take their arba minim a second time after having already been yotzei for the day, they have not transgressed bal tosif. (However, if the person takes the arba minim because they believe that the mitzvah applies the entire day, then they would transgress bal tosif. The person’s action is not problematic inasmuch as their intention is the problem.The source for this is rooted in the two pesukim which are the source for this issur (see shiur 1472). The Gra understands that there are two issurim, expanding the mitzvah itself and adding a new mitzvah. The issue here is adding, as it were, a new mitzvah, because the current mitzvah has already finished. By extending the mitzvah, one is essentially adding a new mitzvah.)

The Gemara says that if the Kohanim add a bracha to birchas kohanim, it is bal tosif. Nevertheless, after the kohanim finish the bracha, the tzibbur wishes them a yasher koach, and the kohanim respond, bruchim tihiyu. The poskim grapple to understand why this additional bracha of bruchim tihiyu is not an issue of bal tosif. One suggestion is the fact that the kohanim already left the duchan, so the mitzvah is finished. However, the Gemara points out that the zman of the mitzvah continues during the day, because if another tzibbur needs a kohen, he still has a mitzvah to duchan for them, so we see that the mitzvah is not finished.

The Chayei Adam next discusses how Chazal are able to make takanos without an issue of bal tosif. We will discuss this question in the upcoming shiur, be’ezras Hashem.

The Chayei Adam holds that bal tosif applies even when an action could be looked at as hai lechudei kai. 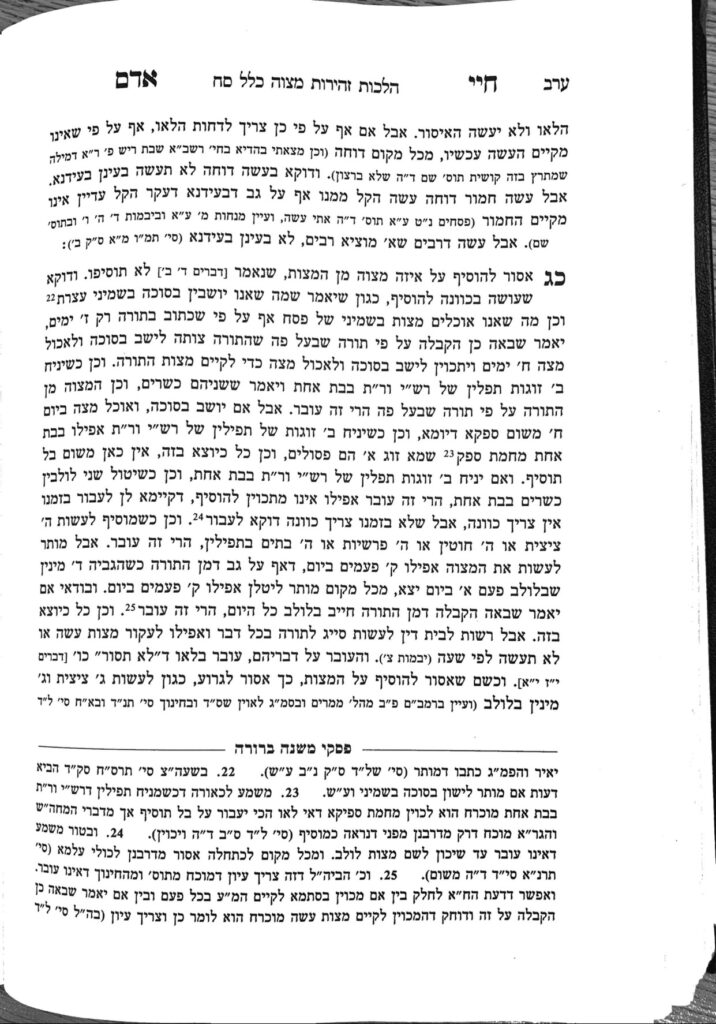