We are continuing in siman 5. We learned that the issur of histaklus requires a woman to cover any ervah, even if it is less than a tefach. The shiur of a tefach only applies specifically to reciting devarim shebikedusha, in that one can recite devarim shebikedusha if less than a tefach is uncovered and they are not looking directly at the uncovered area. Today, we will discuss hair.

Rav Binyamin Zilber, in his peirush on Chayei Adam called Bais Boruch, assumes that since the Gemara does not mention the shiur of tefach in regards to hair, the shiur does not apply, and any amount of hair uncovered would be a problem. According to him, hair is more chamur than non-primary ervahs of the body. The argument is based on another Gemara which teaches that hair is considered ervah, whereas we learned that the non-primary ervah were only made assur by an enactment of Chazal, and in their enactment, they only prohibited ervah of more than a tefach (see shiur 1533).

Rav Moshe Feinstein, in multiple teshuvos, disagrees. He writes that hair has the same status as non-primary ervah, and has a shiur of a tefach.

It is not clear what Rav Moshe was describing when he wrote that the hair across the front of the face is usually less than two etzbaos wide, for any person’s entire hairline is certainly wider than two etzbaos. He seems to be referring to a woman who has a small amount of hair peeking out from the middle of her head, and he is explaining that as long as it is less than two etzbaos deep, one can recite devarim shebikedusha in the presence of that hair.

There are two other questions we need to clarify regarding hair. The first question is whether hair has a different status nowadays, seeing that many women keep their hair uncovered. This question is less of a question nowadays than it was in Europe 100 years ago, where, both in the litvish and chassidish world, women often uncovered their hair. Rav Binyamin Yaakovson, a close talmid of Rav Chaim Ozer Grozensky, writes that he was in a certain city and visited the city’s rav. He did not want to recite a bracha in his house, because the wife of the rav had her hair uncovered. The rav berated Rav Yaakovson, claiming that the halacha is that hair is no longer ervah because women keep it uncovered. He later told this to Rav Chaim Ozer, and Rav Chaim Ozer reacted strongly to that rav’s statement. However, the Aruch Hashulchan also writes that it has become common for women not to cover their hair, and therefore it is not ervah for bracha purposes. Baruch Hashem, our generation has become more sensitive, and women cover their hair again. Nevertheless, the question can still be asked that if one lives in a community where the vast majority of women do not cover their hair, will it create any leniency regarding devarim shebikedusha and allow for more than a tefach to be exposed.

A second question to discuss is whether this leniency would be applied to the general chiyuv for a woman to cover her hair. We learned (shiur 1541) that a woman’s obligation is to cover all of her primary and non-primary ervah, regardless of the leniency for devarim shebikedusha. Maybe this chiyuv will change alongside the halachos of reciting devarim shebikedusha.

We will discuss these questions in the upcoming shiurim, be’eztas Hashem. 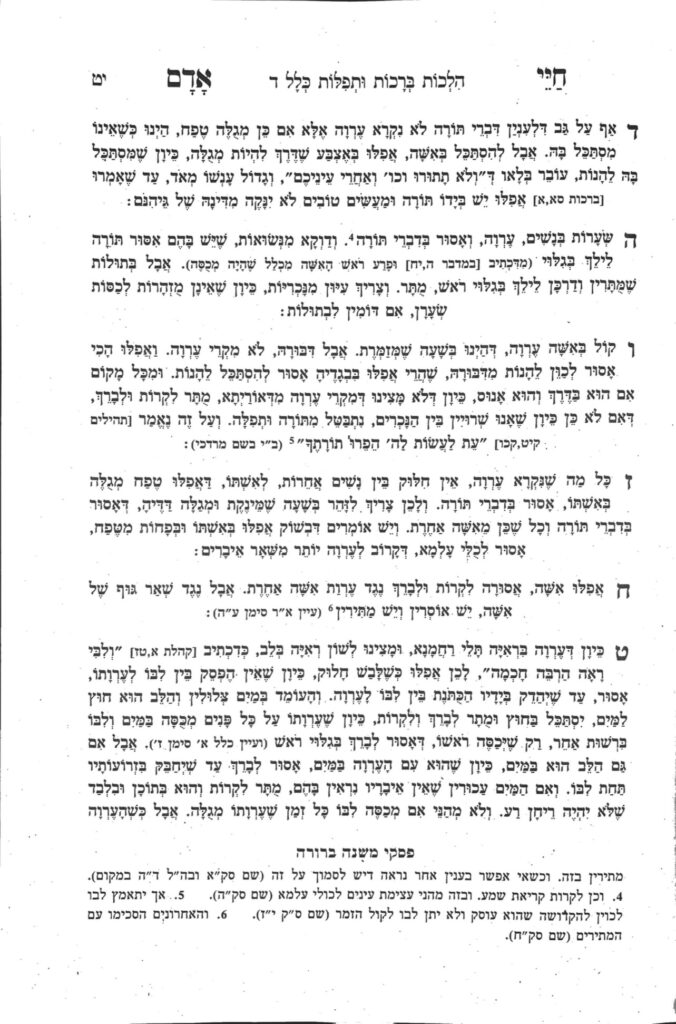