We are beginning siman 2. The Chayei Adam extends the concept we learned in siman 1, that a person is not obligated to return to their original place to recite a borei nefashos, but is obligated to recite birkas hamazon and al hamichya.

The Chayei Adam writes that, regarding foods which require a borei nefashos, since they do not require returning, when one leaves their original place any connection to the previous eating session has ended, and if one wants to eat in the new place–even the same foods or drinks–they must make a new bracha rishona in their new place. Conversely, regarding bread, since one does have to return to their original place, we consider it as though the original state of achila continues, and one does not need to make a new bracha.

The Chayei Adam points out that, regarding foods which require a borei nefashos, even if one were to return to the original eating place, they would still need to make a new bracha, because even in the original place we consider it a new eating session.

However, the Chayei Adam writes that even though one may require a new bracha rishona, they do not need to make a bracha achrona before beginning to eat again. Rather, they will make one bracha achrona at the end of their eating which will cover them for both places.

Although we learned (shiur 1137) that the Rambam disagrees, and holds that one needs to make a bracha achrona before beginning a new eating, the Chayei Adam follows the opinion of Tosfos and the Rosh, who hold that a person makes only one bracha achrona when they are finished eating which will cover both eating sessions. Although the Shulchan Aruch follows the Rambam, the Rama follows Tosfos and the Rosh, and we learned that both Sephardim and Ashenazim follow the Rama in this halacha.

However, a food which requires a bracha achrona in its original place has different halachos. Since we do not consider leaving as tantamount to the end of the eating session, if one returns to the original place of eating they can continue to eat without a new bracha rishona. Furthermore, if they eat elsewhere, they may be able to eat without a new bracha rishona as well. This halacha clearly applies to bread and mezonos, but it is not clear if it applies to other shivas haminim and wine as well. Be’ezras Hashem, we will clarify these questions in the upcoming shiurim. 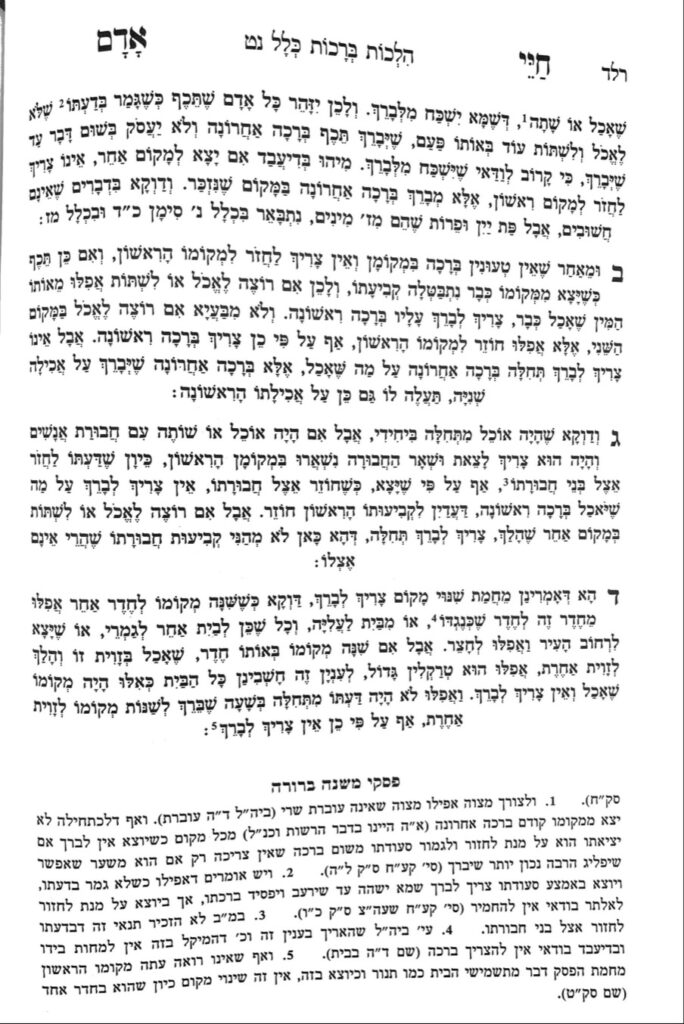